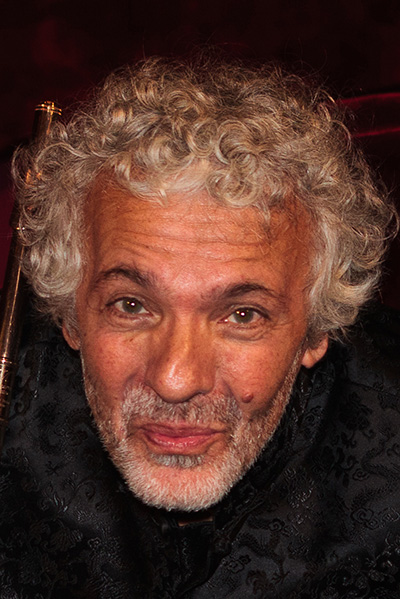 Marc Grauwels is undoubtedly one of the Belgian flautists most catching the limelight today. He owes this to his talent, his dynamic and generous personality but equally to his innate sense of communication. His eclecticism as an international soloist has inspred some one hundred composers from all over the world to write especially for him. To name but a few: Ennio Moricone dedicated to him the flute solos in his “Cantate for Europe” while Astor Piazzolla dedicated to him his “History of the Tango” in 1985 and more recently the Greek composer Yannis Markopoulos likewise dedicated his flute concerto to Marc Grauwels. This flute concerto served as one of the inauguration musics for the Olympic Games in Athens in 2004.

Even before having finished his musical studies in his country he made his orchestral debute, aged only nineteen, with the Flemish Opera. In 1976 he joined the Monnaie Theatre in Brussels as piccolo solo (the Belgian National Opera House) which he left in 1978 to become first flute soloist in the Symphonic Orchestra of the Belgian radio and television. He stayed for ten years whilst being chosen for the same position in 1986 at the foundation of the famous “World Orchestra” directed by Carlo-Maria Giulini.

His career as a soloist was to soar in an impressive way from then on which would entail his definitive departure from the orchestra in 1987. In the same period he taught for fifteen years at th Royal Conservatory of Brussels and today he holds a chair as titular professor at the Royal Conservatory of Mons.

Since 2007 Marc Grauwels plays exlusivly Gold Miyazawa Flutes made specially for him and is Official Endorser for Miyazawa.

In February 2001 following an Asian tour the world management of Naxos in Hong Kong decided to confide to him a whole collection in their catalogue entitled “The Flute Collection”.(Fifteen Naxos CDs are already available on the world market.) Amply gifted by nature with a genial and enthusiastic character he does not refrain from multiplying very diverse musical experiences and readily moves to and fro between e.g. Piazzolla and Mozart and between Bach and Ravi Shankar. And yet, this does nor obscure his attention in keeping an equilibrium between seriousness and a vivid imagination in putting together his programmes. His last world première recording (a Naxos label), devoted to a number of unedited works for flute and percussion –most of these having been dedicated to him- makes a worthy illustration of this stance.

It was after all Marc Grauwels who participated in the recording of the sound track of the film Amadeus by Milos Forman, accompanied by Thomas Bloch and the Brussels Virtuosi Ensemble in the superb adagio for Glasharmonika, flute, oboe, viola and cello KV 617. He furthermore interpreted the youth sonatas, the quartets and the concerto for flute and harp of the integral works of Mozart offered in a single box containing 170 CDs. The case, the Golden Disk, is currently an unmatched commercial success with Brillant Classics for the 250th anniversary of Mozart (over 100.000 copies having been sold already).

With a minimum of a hundred concerts a year all round the world, more than 40.000 pages devoted to him on the Web and a discography listing more than 60 CDs as a soloist performer Marc Grauwels has shown that the right artistic approach does pave the way these days for a flutist’s tremendous public success. Both in his career and in his artistic interpretations Marc Grauwels has always stayed true to himself… which after all does not count as the meanest of his qualities.